More than 400 children from Pat’s Schoolhouse pre-schools, together with their parents, grandparents and teachers, walked for charity on Saturday, 28 May 2016, at the OCBC Arena, Singapore Sports Hub.

The charity walk was organised by Pat’s Schoolhouse (Tanglin) in conjunction with Father’s Day, and in support of ‘Start Small Dream Big’ (SSDB), an initiative by the Early Childhood Development Agency (ECDA). Fund raised from the walk will be donated to the Children’s Cancer Foundation, a beneficiary of the President’s Challenge. The centre’s aim for this project was to promote healthy living and family bonding, while lending a helping hand to those in need.

Despite the drizzling rain, spirits were high at the OCBC Arena. Children sought donations for the sale of ‘Pat’s Times’, a current affairs newspaper handwritten and illustrated by the K2 children. The creation of Pat’s Times has allowed pre-schoolers to not only showcase their creativity and enhance their language and literacy devlopment, but also to understand the intention of their project and the importance of being compassionate.

Minister for Social and Family Development, Mr Tan Chuan-Jin, arrived at 7.15 am to officiate the event. After flagging off the walk, Minister joined a friendly game of tug-of-war with eight other fathers at the first game station while the children cheered from the side.

Children and their daddies played other bonding games throughout the walk, ending with a three-legged race to the finishing line! Through these games, fathers learnt to trust their little ones and collaborate with them to think out of the box to solve problems. The children learnt to care for their daddies even though they are still little. This is in line with the ‘Start Small Dream Big’ message that children are never too young to do good and care for others around them.

Community projects such as this charity walk provides an authentic and meaningful platform for children to use their abilities to serve others. Through these projects, children learn about responsibility, empathy and compassion for others. As Minister Tan Chuan-Jin said during one of the media interviews, “Once you start them from young, you form habits that last a lifetime.”

Pat’s Schoolhouse raised more than $13,000 for the Children’s Cancer Foundation from this event, all thanks to the support of parents, the staff, and the wonderful efforts of the children! 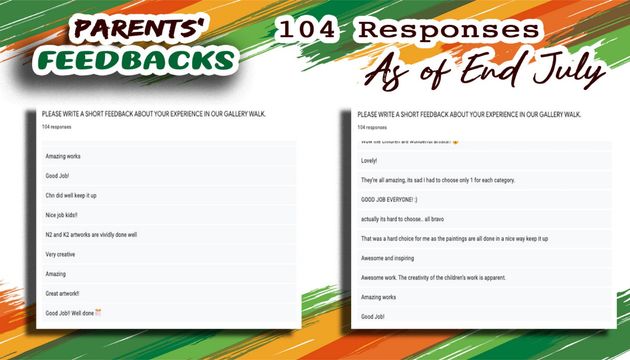 In June, the Playgroup children carried out an introductory exercise through a ball activity held indoors. They were invited to roll a ball to-and-fro with their peers while... The Playgroup children were told the importance of exercising especially due to the Covid-19 situation. Afterwards, they were invited to carry out an exercise to run through... The Playgroup children were invited to participate in a course of exercise where they jumped on multiple foot markers and crawled through a tube. Through this activity, they... The Playgroup children learnt how exercising can be incorporated into music through a Zumba session. They were excited and energetic as the teachers guided them through some...