When we reached All Saints Home, the first thing to do on the list was morning exercise with the elderlys there. The children took some time before they warmed up to the volunteers and elderlys there but was eventually able to join in by counting and following the exercise steps. The children grasped quickly that they have to make smaller movements in order not to hit the elderlys who are wheelchair bound while doing the exercise.

The last activity was to make fruit salad with the elderly. The children took turns to cut the fruits and place it in the elderly’s bowls for them to eat, some of them even tried to involve the elderly in the process by getting them to hold the fruits while they cut for them. The parent volunteers assisted the children and elderly with the process of making fruit salad and explaining the benefits of each fruits as well as the rationale behind making fruit salad with them on this day. The little interactions between the children and the elderly made the activity even more meaningful.

Though some parents were not able to make it to the field trip due to their busy schedules, they contributed to the donation with many different items for All Saints Home – tissue paper, diapers, food and drinks. The children and the teachers packed it into the boxes together the day before and noted down the things that were donated before presenting it to All Saints Home the next day.

During the fruit salad activity, there was not enough bowls for the elderly to have individual bowls for their salad and they had to share with one another. In the future, we can ask for the exact number of elderly that will be participating in the event to ensure that we prepare sufficient materials for each activity. One thing that we did great was how the children were so understanding towards the wheelchair bound elderly and them knowing how to behave around them to help them with the activities. They were briefed beforehand and they remembered things they discussed in the class about their behavior and actions at All Saints Home. The parent volunteers were also a great help during the activities, and this shows the importance of parent-school partnership as the children were able to learn a lot through the parent volunteers as well. From the bus journey to the activities at All Saints Home, the parent volunteer shared a lot of things on different topics with the children. 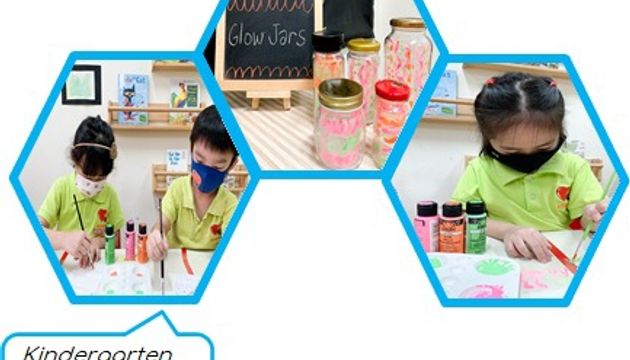 Upcycling all we can!

We used the launch party as a platform to introduce the themes of One Less and Go Green. After analysing the areas of change, we decided to title our project: Upcycling all we ...

Eagerbeaver Schoolhouse 2 Pte Ltd's tribute to the Essential Workers and our Environment Protectors. Donation Drive for the Grands at St Luke’s Eldercare

Every little act can make a difference. 60 K1, K2 children and elderly, painted a square canvas each, adopting artist Wassily Kandinsky concentric circles. These paintings (a ... Workers in the sales industry are just as important. Our kids are here to promote health to them and they also gave out handmade stationery cases to our frontliners! Thank you ... It was indeed a remarkable yet a fruitful experience especially during this unforeseen times for us teachers and our K1 children.Finally we completed our project with a grace ...

我们的这一趟SSSB之旅要在这告一段落了！老师带领我们一起进行了总结与回顾。Its been a journey on our Start Small Dream Big p...