IF We Built a School

“Rome wasn’t built in a day, but they were laying bricks every hour.”

This year, the school discussed the theme of inclusivity and appreciation of diversity in the society. If we were to enforce true equality in the safe space called a school, regardless of race, gender, religion, ability and value, what would that be like? What would it be if we let THE CHILDREN built one? Is it a terrible idea? NO!

The children identified the classroom, play space and The Book Nook as the most important parts of our Star Learners space. Lookout for the colour code

Day 2: The children were given the task to lookout for the ‘Dengue Alert’ Banner together with their family in their neighbourhood and identify if that area is at Low ... Look for the breeding spots

Day 3: The children were introduced to the 5 Steps of Mozzie Wipeout which can help in preventing the breeding of mosquitoes. They were then invited to a scene whereb... Storytelling on a self-made book about mosquito

Day 4: We have created a story beforehand which talks about how the cleanliness of the environment around us affect the breeding of mosquitoes. After the storyreading session, ... 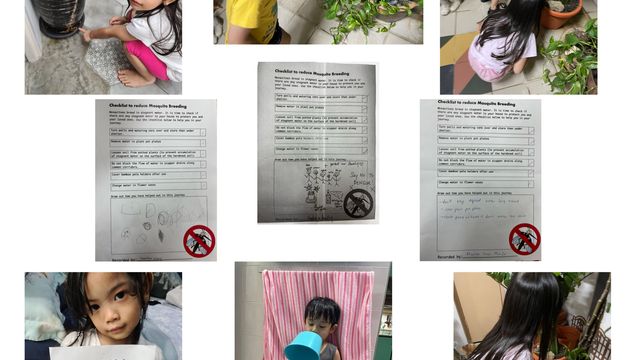 Day 5: The children were given a task to be completed at home together with their families. They were given a checklist to ensure that they have checked all the possible ...