Chinese New Year is the most significant festival among all Chinese festive celebrations. This year, our children will be engaged in a variety of fun-filled events.

We have organized an excursion to Garden by the Bay (Flower Dome and Cloud Forest) for our Pre-Nursery (PN) to Kindergarten 2 (K2) children.

During the tours of the conservations, there was a facilitator to have a guided tour with the K1 and K2 children. K1 and K2 would learn about the story of “Nian”, the 12 animals of the Chinese zodiac, as well as the popular festive colours and plants. As part of the tour, the K1 and K2 children received a take-home activity and learned about the need to abide by safety rules and regulations during the excursion as part of the experience too.

Besides that, our Pre-Nursery (PN) and Nursery (NR) children learned about the story of “Nian”, the 12 animals of the Chinese zodiac, as well as the popular festive colours and plants during the tours of the conservations from the teachers.

“ We are on the bus heading to Garden by the Bay.”

“ We have a pretty facilitator to bring us around Flower Dome.”

“We have a group photo with the lion dance.”

“What colour is the Chinese lantern?” It’s the start of the K2 Clean and Green Journey! To embark on our journey, we started out with our little green fingers.We transferred the Green Wave plant into both the mini ... To above and beyond! Our little green fingers had the opportunity to plant our own Xiao Bai Cai plants. By growing our own plants, the K2 children learnt about how ... 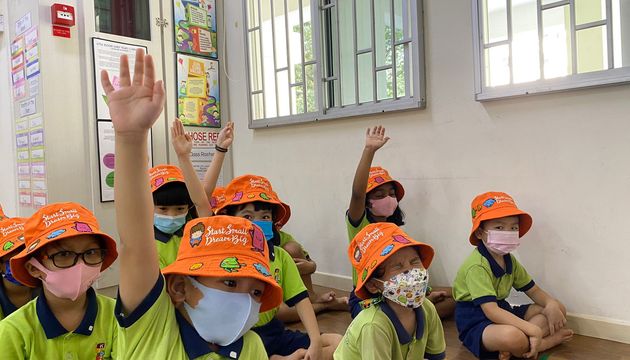 Our K2 children in Kidz Meadow - Jurong West eagerly participated during the discussion of different ways Singapore families like to eat. At first, pictures of families eating ... Show & Tell: My Family & I Eating Together, Heritage I want to keep forever!

After learning about different ways of every heritage eats, the children were encouraged to snap some photos with their family during dinner time. The photos were sent via ...