Everyone was beaming with excitement during our SSDB Launch party at River Safari on the 25th of April 2019! This year, our school children are focusing and learning on how to care for the ocean and its inhabitants, ways to prevent marine pollution and save human food chain - Marine Conservation.

Prior to the launch, the Nursery and Kindergarten One children of Khalsa Kindergarten made a concerted effort to create the beautiful SSDB banner. The Nursery Two children were invited to create the backdrop for the banner. They painted the blue sea using balloon printing technique. The Kindergarten One children were involved in creating the sea creatures cut-out. Not forgetting our parents’ sheer enthusiasm in making the musical instruments using recycled materials which also highlighted our campaign for “Reduce, Recycle and Reuse plastics.

To kick start our SSDB project “Marine Conservation”, we partnered River Safari which provides the platform for children to be ocean advocates against plastic pollution and poaching. Our Principal Mdm Shanti was invited to inaugurate the launch at River Safari by unveiling the banner. Followed by that, the children presented a song that pledged to protect the marine lives. At the end of their performance, they children continued with their tour around River Safari. After getting an insight to the causes that endangered sea creatures such as dolphin, sharks, corals and sea turtle, the children pledged to be the ‘Guardian Of The Sea’ and protect marine lives.

It was indeed a great way to kick start our Start Small Dream Big Project this year.

With the slogan - “No one can do everything, but everyone can do something” - etched in our mind, we will move on towards the next leg of our project!

Appreciation for our healthcare frontliners

Our K2 students made these artworks to show appreciation to our healthcare heroes . With their creativity,they designed their own magnetic coasters.   These unique token are... 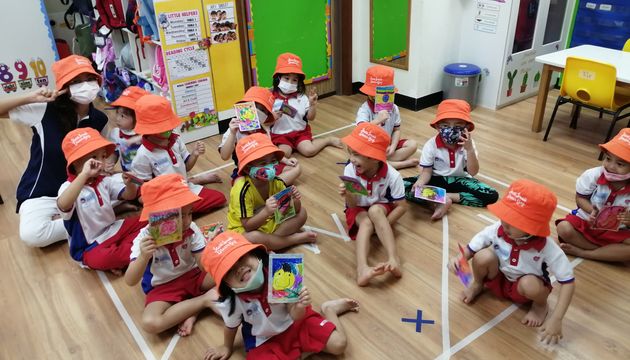 It's Never Too Late to Say 'Thank You!': A Tribute to Frontliners, Sparkletots Preschool @ Eunos Blk 620 CC

As we continue to fight this medical battle, and our healthcare soldiers are still risking their lives to win this pandemic war, it is never too late to say 'thank you!' We are... Now that the collection boxes are ready, we placed it outside our school where parents and children can drop their recyclable materials off. We scheduled our collection da... Our K2 children embarked on our Start Small Dream Big journey. Our project topic on “Zero Waste” was chosen based on considering children’s prerequisite knowledge and opinions... SSDB 2020–Our Care For The Seniors During Challenging Times

In our continuous effort to promote interaction between pre-schoolers and seniors, My First Skool at Blk 164 Rivervale Crescent has decided to embark on our project “SSDB 2020:...