With the success of the Launch Party, our children and teachers were excited to continue on their SSDB journey with another special group of people! With a stroke of serendipity, we had some construction workers who were carrying out some renovation works in our school compound. The K1 and K2 children then took this opportunity to find out more about the workers. After a discussion on how they would like to interact with the workers, the children decided that they would hold an interview session with them.

Before the interview, the children gathered together in the K2 classroom to brainstorm questions that they had for the workers. Armed with a camera and a microphone, the children approached the workers and started their interview! The workers were more than willing to answer the children’s queries. There were even moments of miscommunication which resulted in bursts of laughter from everyone.

The children were given the chance to learn simple greetings in Bengali such as, “Please” and “Thank you” from the workers. Smiles were reflected on the workers’ faces as they heard the children attempting to echo the greetings.

It was a meaningful afternoon that allowed the children to get more comfortable conversing and interacting with the workers. This year, our children did a launch party on 4th April 2022. Children discussed on the big plan to set up a vegetarian cafe to sell snacks and drinks to their parents. During ... 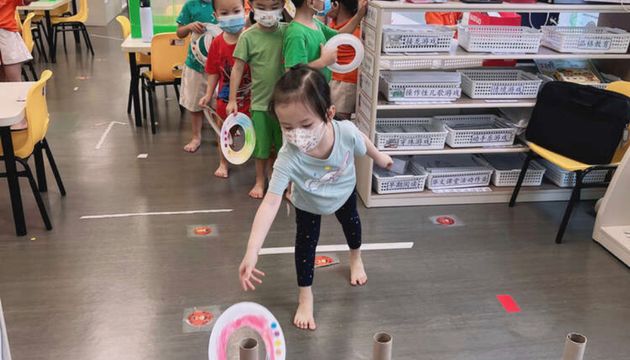 The children were engaged in making games using recycled materials brought from home. This lesson taught them how to be resourceful as they use recycled items and turned it ... The Nursery children had a meaningful experience in learning how to plant seeds. Teaching them how to plant and how to take care of it develops new skills to children such as ... The parents in the N2 class has made a video to appreciate our Unsung Heroes who are our peschool teachers and ... 2022 SSDB Closure Event- Gardeners Who Believe In Our Tomorrow For this year’s SSDB, our center has chosen the category, “Caring for animals: Marine Conservation”.We conducted a launch party for SSDB, on the 13th of May. The children ...