Upon reaching the old folks’ home, we started off with the morning exercise that they prepared for the children. They stood with the elderly to warm up and get ready for the activities that were planned ahead. They followed the movements and were very cautious about their movements, so that they will not hit the elderly who were sitting on their wheelchair.

After months of preparation, it was finally time for the children to showcase their performance! First up, they performed their own edition of “Top of the World” and “You are My Sunshine” accompanied by the ukulele. Next, they danced to the Chinese song “石头剪刀布”. Both songs brought smiles upon the elderlies’ faces, as they clapped and danced together as well.

The activity that was prepared by the children consisted of throwing the balls into the holes of the animals’ mouth that are painted on the box. As the elderly had some restrain in their movement, the children helped to pick up the balls for them and even rotated the boxes so that every elderly had a chance to play!

We received generous donations from parents and the children presented them to the elderly! The elderly showed their appreciation and thanked the children for their donations as well. It was nice to see their faces light up at a small yet impactful gift.

“Seeing two different generations coming together was a very heartwarming sight. Despite the language barrier and age gap, the children tried their best to talk to them during the activities. I felt that it was a good way to expose the children to the older generation, to know what it is like to interact with them, especially for those who rarely have the chance to do so. This trip also allowed me to see the children’s thoughtful nature, as they thought of ways to accommodate to the needs of the elderly, such as picking up the balls and rotating the boxes for them. Overall, I would definitely want to bring them there again next time.” 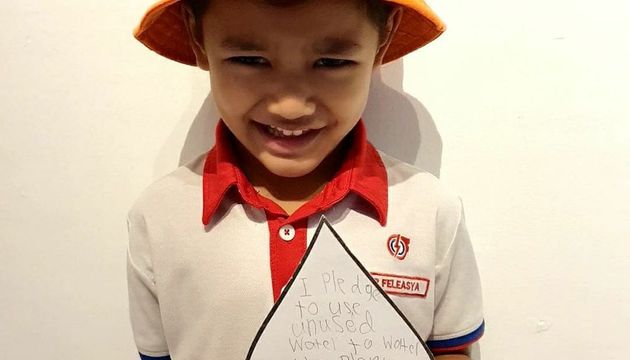