Prior to Teachers’ Day, the Kindergarten 1 children were engaged in a discussion on possibilities to show their appreciation for the teachers. The children from the K1B class then decided to draw, paint and write a short messages in expression of their gratitude.

Some children had chosen to express their gratitude to the teachers of their siblings too!

The messages that the children include; “I love you, Teacher!”, “Thank you for taking care of my younger sister/brother.”

The children participated actively to discuss among themselves as they illustrated their ideas collaboratively.

The children then shared their illustration of ideas with their peers and the teachers. They shared about the daily objects that can be included in the performance as the musical instruments. The trio had decided on their musical instruments as ‘shakers/maracas’, ‘tambourines’ and ‘two-tone block’.

The children chose the song titled ‘Thank you Teachers, Thank you’ for their Teacher’s Day Performance. Children learnt about the importance and benefits of recycling. It saves the environment. In this project,children used materials like tissue box,milk carton,ice cream sticks ... 继上次的学习之后，我们认识了许多的野生动物，更加了解它们，也知道了垃圾如何分类处理，这样做也能在一定程度上帮助野生动物们维护它们赖以生存的环境。除此之外，我们还可以做什么呢？Continuing from our previous learning journey, we have a better and deeper understanding ... ‘Save Water - Save Lives’The children observed how clean sea water gets polluted. Consequently, they realised how marine debris affects not just water itself but also marine ...

Introducing the idea of recycling can be a great stepping stone to other waste reduction practices like zero waste and plastic free living. Especially for the children, ... BE A RAINBOW (LITTLE NINJAS OF PCF SPARKLETOTS @ TECK GHEE 235 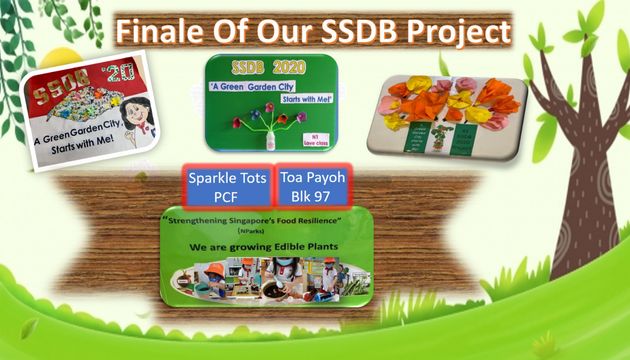 Phase 3: Our Garden Project- A sustainable one!

We have come to the last phase of our garden project. But it doesn’t mean it’s the end. Well, we are making it a sustainable one! Even though the term of our SSDB Garden ...