’Living in a Plastic-Less World’ - Innovation in Creating DIY Toys

The K1 children have learnt so much from engaging in this learning journey. The children learnt that they could do small changes to help saving the earth; by using less plastic or by slowly  changing their idea about disposable plastics and containers of any kind. The children have been very positive to move forward having the knowledge and passion for change to share with everyone.

As part of our campaign ’Living in a Plastic-less World’, the last activity that the children collaborated to do together was to create their ’do-it-yourself’ toys using disposable plastic and other recycled materials.

The children started grouping themselves, and as a group, they brainstormed to come up with an idea and a concrete plan on the kinds of toys and games would they want to make. The variations that they suggested were endless, such as cars, rockets, board games, robots and many more. The children then discussed the materials that they will need to make and complete their ’do-it-yourself’ toys and games. Thereafter, the children thought of and agreed to the rules that they followed when they played.

The K1 children had fun playing with their creations as they shared them with their friends. The children also reflected on the process of creating their toys. The children realised that making such fun toys were more enjoyable than visiting a toy store and buy. The children also mentioned that they can create more awesome toys to share and play with their parents, siblings, and friends using materials that they just usually throw away. According to them, ”less rubbish, happy earth.” The children ended the SSDB - Trash to Treasure journey on Children’s Day.They made a variety of gifts with the recycled materials collected. On top of receiving gifts on this ... Last April 29, 2019 we invited parents to come and join us for our SSDB Launch Party. In this way, the parents will get know what our project for this year is all about.For ... 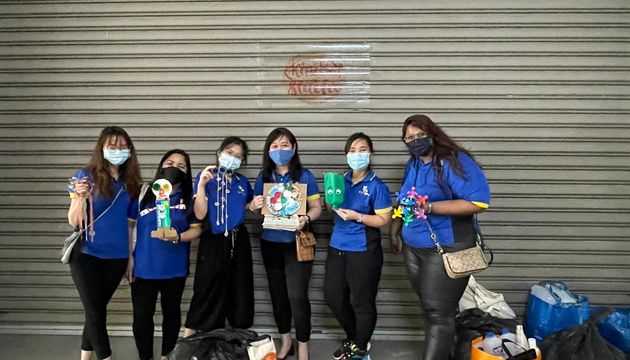 If we create a culture where every teacher believes they need to improve, not because they are not good enough, but because they can be even better, there is no limit to what ... Here’s the story on our centre’s World Water Day Celebration as part of our concisive effort to be part of the #GoBlue4SG Movement. In commemoration of World Water Day, ... As part of our Singapore’s Green Plan, National Park Board(NParks) launched the OneMillionTrees movement to plant a million trees in Singapore by year 2030. There is on old ...